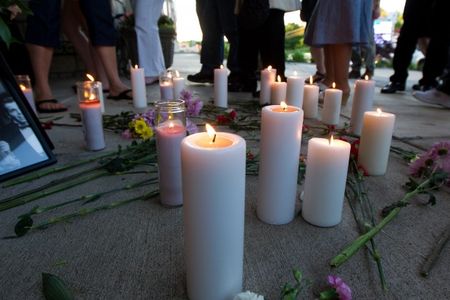 Thousands of fans had flocked to Graceland in Memphis for a candlelight vigil marking the 35th anniversary of the singer’s death.

It’s been 35 years since the rock and roll icon died at home in 1977 from a heart attack after battling prescription drug abuse. Crowd cheered as Presley’s daughter and ex-wife appeared publicly at Graceland to personally thank them for their loyalty. It was the first time both women had appeared together at the annual gathering, which became an official event in 1980. Priscilla and Lisa Marie Presley spoke for little more than a minute at the gates of the mansion, the music legend’s longtime home and his burial place. The music-themed gates of Graceland stayed open all night to a steady stream of candle-bearing well-wishers.