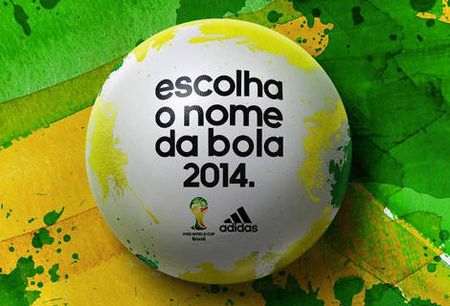 Adidas has announced the short list of potential names for the 2014 World Cup ball.

A World Cup sponsor has handed over to the fans the task of naming the ball for the 2014 World Cup. There are three names in the list of finalists. All of them are Portuguese words and all are feminine, conforming to the Brazilian stereotype of the ball as a woman, to be caressed and cared for. The three choices are

-Carnavalesca, a word describing someone who enjoys to participate in the country’s carnival celebrations.

-Bossa Nova, a reference to the famous samba-jazz music genre that emerged from Rio de Janeiro in the late 1950s and 1960s.

2014 World Cup promises to be a electric competition in one of the world’s most vibrant countries, Brazil. Fans can vote for their preference on Adidas Brazilian web page till the ends September 2.