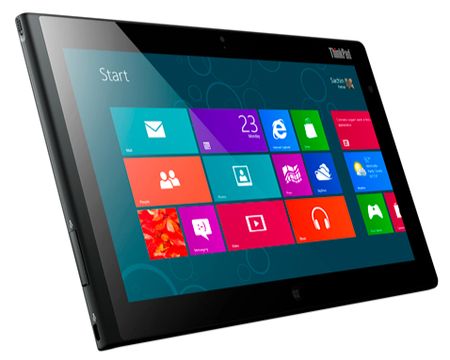 Lenovo has announced the ThinkPad Tablet 2, which is running upcoming Windows 8 Pro.

Lenovo ThinkPad Tablet 2 packs an Intel Atom processor and a 1,366 x 768 IPS LCD multitouch display, along with a battery good for up to 10hrs runtime. The ThinkPad Tablet 2 comes complete with 4G LTE internet, 8 megapixel front and 2 megapixel rear cams, full-size USB and HDMI ports, and the option for a digitizer and fingerprint reader. Tablet will be compatible with a pen that can be used for note-taking and signatures, as well as a keyboard and dock, to type on some actual keys rather than a glass screen. A price for the ThinkPad Tablet 2, which is slated to launch alongside the release of Windows 8 in late October, has not yet been determined but Lenovo plans to make it competitive.