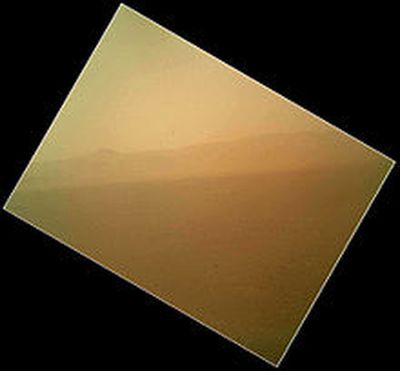 Curiosity rover sent back its first color photo from the ancient crater where it landed on the Red Planet.

It offers us one of our first views of the north wall and rim of Gale Crater, the 96-km wide impact basin where Curiosity touched down. The picture was taken by the rover’s camera and appears fuzzy because of high levels of dust on the Mars Hand Lens Imager (MAHLI) camera’s cover. Once that cover is opened in about a week, the camera’s picture quality will dramatically improve. Nearly 300 low-quality thumbnails were sent back, which NASA processed into a short video showing the last 2.5 minutes of its white-knuckle dive through the Martian atmosphere. NASA scientists have concluded the landing was close to perfect.