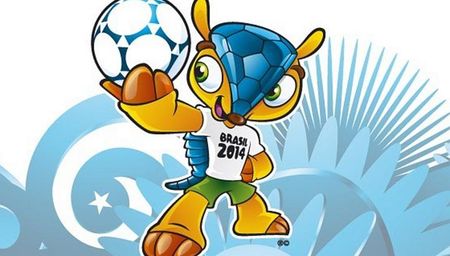 The official 2014 World Cup mascot is the Brazilian three-banded armadillo.

The official mascot was unveiled during a television show Sunday which featured former Brazilian football star Ronaldo. Fifa said Brazilians will have until mid-November to choose the mascot’s name from three choices – Amijubi, Fuleco and Zuzeco. The three-banded armadillo, which is in danger of extinction, rolls up into the shape of a ball when threatened and is commonly found in north-eastern Brazil. The mascot carries the colors of the Brazilian flag. Fifa also recently announced that the World Cup ball will be called “Brazuca,” an informal word often used to describe national pride.